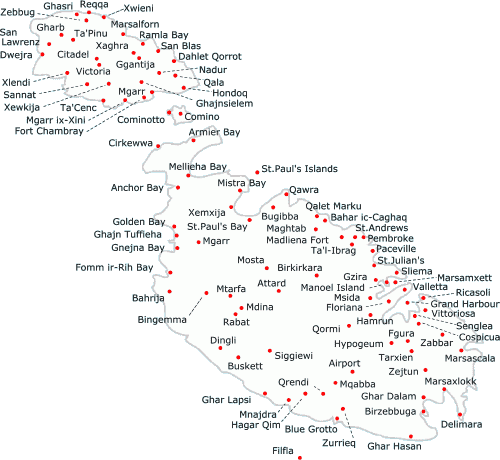 Located in the Mediterranean Sea, just south of Sicily, the Maltese archipelago basically consists of three islands, Malta, Gozo and Comino. Their total population is about 400,000.

The largest island of the group is Malta, from which the archipelago takes its name. It has a population of just over 525,285 (World Bank, Eurostat 2020). Valletta, the capital, is the cultural, administrative, and commercial centre of the archipelago. Malta is well served by harbours, chief of which is the Valletta Grand Harbour. Its international airport is at Luqa, five kilometres from the capital.

The second largest island is Gozo. It is topographically quite different from Malta, and is quaintly attractive for its less industrialised way of life. Gozo can be reached from Malta by ferry-boat from Cirkewwa and Pietà, near Valletta.

Comino, Cominotto, Filfla and St Paul’s Islet are the other major features of the archipelago. Of these, only Comino, straddled between Malta and Gozo, sustains a very tiny population. Turned into a popular resort because of a couple of very fine beaches, Comino can be reached from Cirkewwa, either by boat or by excursion ferries during the summer months.

The distance between Malta and the nearest point in Sicily is 93 km. The distance from the nearest point on the North African mainland (Tunisia) is 288 km. Gibraltar is 1,826 km to the west and Alexandria is 1,510 km to the east. This strategic position has allowed Malta to develop as an important trading post. The Malta Freeport is one of the Mediterranean’s leading ports for container transhipments.

The climate in Malta is warm and healthy. There are no biting winds, fog, snow, or frost. Rain falls for only short periods and averages about 578 mm in a whole year. The temperature averages 14.1° C in winter (Nov-April) and 32° C in summer (May-Oct). The sun shines for an average of 6.46 hrs each day in winter and 10.11 hrs in summer. The hottest period is from mid July to mid September.