THEME: WE ARE ALL CONNECTED

The Talk will be in English

After the Talk we shall proceed to the Victoria Restaurant for our usual Pasta Night for the price of €12.

All Lions Club members, family and friends are invited
Please inform Lion Chris Borg Cardona by  not later than 17th November 2019 if you will be joining us for the Meal only  by SMS on mobile 79246760

On Sunday the 27th of October, we were given a tour of Stella’s Garden Centre which has lovely plants, trees, and herbs. We were shown the advanced method of growing seedlings from high-quality seeds which are grown and then distributed as seedlings to farmers throughout Malta who grow them on to produce a variety of vegetables, flowers, and fruit for the local market.
Our guide for the visit was Mr Kurt Grima who gave an informative talk about the process of growing the seedlings and also explained the olive oil pressing method. We were told that in Malta harvesting olives is done from mid-September until the end of November.
The production area has a hopper into which the olives and leaves are placed.  By means of a conveyor belt, the debris can be separated from the olives.  After washing the olives are crushed and kneaded in a Malaxor tank for forty-five minutes. It is here also that oil, water, and solids are separated by centrifuge. The pure oil is then collected.  This natural extraction process ensures the oil retains all the nutrients and antioxidants that are so beneficial for our health. The oil produced is Extra Virgin Olive Oil because it is not heated, nothing is added and the oil is not treated in any way. It takes approximately ten to twelve kilos of olives to produce one lit er of oil. The waste from production is used for compost or for making into logs for use in fireplaces.
We all appreciated sampling the oil with Maltese bread and bigilla….delicious!
Thank you to Lion Isabelle Micallef for kindly arranging this lovely visit and also thanks to her generous family for hosting us.
Very grateful thanks to Mr Kurt Grima for showing us around and explaining the process of obtaining the high-quality cold-pressed olive oil.
This was a well-attended fundraising event greatly enjoyed by all who came.
By Susan Galea Borg 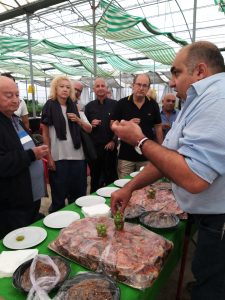 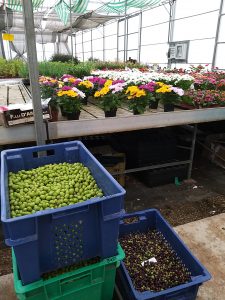 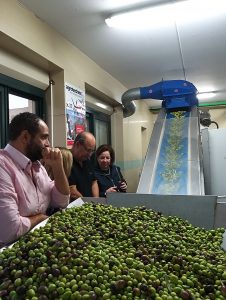 Please email  Lion Doreen Davis on arcoiriscsw@gmail.com if you will be joining us for the Demonstration and for  Lunch by not later than 23rd October 2019

Paid up Members are FREE but Guests will be charged €50 per person all inclusive. Friends are welcome.

The Main Course will consist of Sous Vide Veal Loin and Salmon. You are kindly requested to advise Lion Joe of your preferred option and of any dietary restrictions, when placing your booking.

Please email  Lion Joe Messina on messi242@gmail.com by not later than 2nd November

On Wednesday 16th of October Joan Barnewell from Dublin, Ireland delivered a very well-received talk on The Story of Chinese Porcelain and its Journey to the West. Joan’s talk was inspired by her interest in the arts of Imperial China and in particular her love of the Qing Dynasty porcelain in the Chester Beatty collection where Joan has been a tour guide for many years.
After a brief history of Chinese pottery and porcelain, Joan introduced us to the famous kilns in Jingdezhen. We learned of the remarkable people who climbed the mountain every day for the secret ingredient-kaolin-and carry it down the mountain where it was processed and fired in enormous kilns to make beautiful objects for the Imperial Palace-and eventually for Europe.
We followed the boatmen and stick-men on their arduous 700-mile journey.  They carried the precious porcelain across large lakes, through rivers, across rapids and rough slippery terrain and through steep mountain passes in all weather to reach the port of Canton. The labourers were met there by the merchants and were photographed by the renowned Scottish photographer John Thomson.
It was here in the 16th century that the Dutch and Portuguese ships carrying porcelain
began their journeys reaching Europe several months later-if they were lucky.  Many ships did not make it.  The shipwrecks which would have been a disaster at the time have proved to be a blessing as porcelain…. like gold is not affected by being under the sea.
In 1604 a consignment of 100,000 pieces of porcelain reached Holland on the SS Catania and was sold at auction it caused a stir.  Everyone who could afford it wanted it.
If the secret of how it was made could be found…. there was a fortune to be made.
A French Jesuit missionary priest managed to get the details from some of his Catholic converts and the rest is history.
Today the Chinese are buying back porcelain at auctions around the world.  We saw a slide of a sixteen-inch vase from the 18th century which had been used as an umbrella stand.  It sold to a buyer from Beijing for $43 million.
After 2000 years porcelain is still being made in Jingdezhen a testament of Chinese adaptability, great artistry and craftsmanship and the beauty of porcelain.
Many thanks to Joan for giving us an extremely interesting talk increasing our knowledge and appreciation of fine porcelain from past to present. 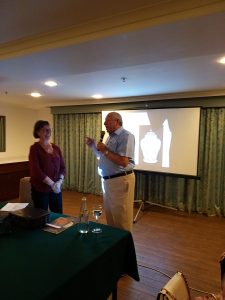 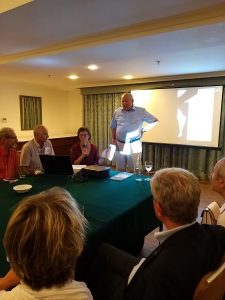 By Lion Susan Galea Borg.
A visit was made to the Aviation Museum on 15th September 2019 which is especially interesting if you have a family member or friend who served in the RAF.
The museum shows the role of aviation in the Second World War and explains their contribution to protect Malta.
Some of our members watched a video of Malta being bombed in WW2.
There is an interesting range of exhibits that we could get up close to.
We saw wartime aircraft and also post-war jets…..A Spitfire, Hawker Hurricane, de Havilland Tiger Moth, Piper L4, Douglas Dakota 1V, Fairey Swordfish and others.
Some jets seen are de Havilland Vampire 11, Hawker Sea Hawk and Gloster Meteors.  We also saw land-based vehicles. Uniforms and memorabilia also form part of the collection.
The museum also remembers individual men like Sgt. Pilot Tony Boyd who died in a Spitfire airplane to save Malta.  Many men now lie at rest at Kalkara War Cemetery having died as heroes during 1940-1943.
The museum visit was a great success. Many thanks to our guide Mr. Ray Polidano who gave us an excellent tour full of information and history
of Malta’s role in aviation history.
Grateful thanks to the family Polidano who take care of and run the museum.
This visit was a fundraising event which raised one hundred euros. 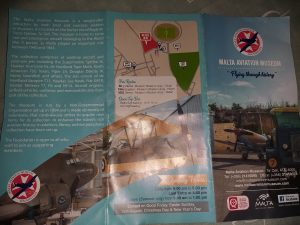 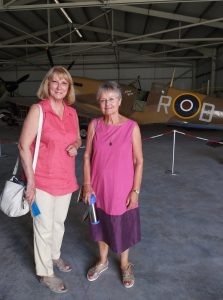 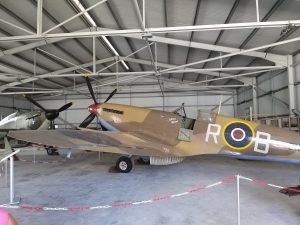 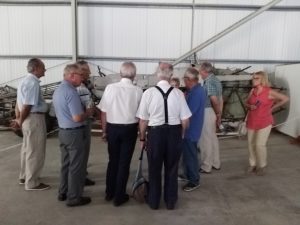 will be giving us a talk on

Presentation will be in English.

Sliema and Nibbles made by Victoria Wilson will also  be served.

All Lions Club members, family and friends are invited

After the talk we shall proceed  to a restaurant at the Victoria Hotel  for a light dinner.
Please inform Lion Chris Borg Cardona by  not later than 14th September 2019 if you will be joining us at the restaurant by SMS on mobile 79246760 or e-mail.  chrisborgcardona@gmail.com